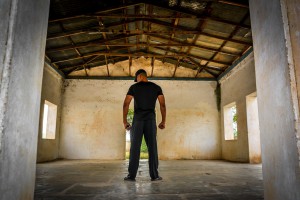 A man in my position is expected to wear a mask for so long that he forgets who was beneath it.

They said that speaking of romance and matters of the heart would make a man weak – on the contrary, it only makes a man more passionate in times of war. We can only be as strong as the women that raised us, as tears wet this paper like the rain drenches the soil. Just as an embryo incubating itself in the secrecy of a womb, I was held incommunicado for a predefined period of time. Here, I reveal a manuscript, perhaps naively, to delineate an interpretable blueprint of many men within the context of our personas; to shine a light of understanding on the aphotic regions of my heart; to know what makes our brothers suffer dolorous moments in silence during the matutinal and nocturnal hours of the day.

Scientifically, tears are produced when the lachrymal glands’ nicotinic and muscarinic receptors are activated. As a sentient human being in a perceptible world, the tears secreted by these glands are naturally released in times of pain and joy. Tears, which, in the absence of witnesses have absolutely no possibility of being wiped away. A man’s tears, however, are manipulated and monopolized by a tacit social contract. So therefore a man must cry from within; our tears are not at the eye level, but at the bottom of our hearts concealed in an infinitesimally vacuous space. Abandoned, where no witnesses take the stand, tears become the prison that introduces a man to himself. In times of pain, we tighten our musculatures under the protective umbrella of our self-importance.

Now at the swing of time’s pendulum, we witness yet another generation surrounded by hearts of stone, in cities built of stone, stoned in their quest to seek deeper avenues of meaning. Throughout life, many men are nothing more than a spectator – an anonymous face standing against the wall of an opaque discotheque, in the midst of pretentious visages gyrating amid the lethal fumes of emptiness. Here I see my brothers attempting to uphold a façade below the limelight, but weeping silently with each his own story never foretold; narrated only by a subconscious morse code that society never deciphered.

We all became an outward mirror of an inner condition; the helpless victims of random childhood events fated to plunge memoryless into an adulthood whose every aspect grows increasingly obscure. The modern world has shamed us; our souls inordinately marinated in the culture of speed – systematically desensitized, fractionized, and homogenized by the umbrage of mutual misunderstanding. Opting for solitude rather than allowing love to take its course, we suffer an emotional impairment that disables us from trusting one another. Thus, we enunciate our frustrations like the victims of a broken promise, as though our best efforts could never appease the wounds that lie within, clinching to emotional addictions that refuse to satisfy the heart’s vacuity. Hastening our own demise as we look for substitutes in the dense patina of ephemeral relationships, we’re absent in our presence, we’re surrounded yet alone, steadily sinking into a noxious miasma of longing. It is here that we try to exist, engulfed by an unrequited sentiment of loss; an inexplicable feeling of not knowing what we’ve lost.

Mystified by competing priorities and unable to escape these worldly superficialities, many men run out of currency pursuing women, but never run out of women pursuing currency. And so we succumb to vanity and erode moral certainties. In anticipatory demeanor, we are transformed into cut-throat desperadoes leeching for substitutes. But there are no replacements – most are left to stand alone in the dimness as love endlessly eludes them at every turn; a state of mind bearing resemblance to the times when you missed that special someone so much, you wanted to reach out and pull them out of your dreams.

Love – the word itself is often vocalized in vain. For a man, its power is often underestimated, antagonized and countermanded in his every effort. Yet our knees tremble at the exchange of glances in the abeyant moment of romantic hesitancy. Too many refused to believe that when a man truly loves a woman, she will become the reason he smiles; that he will embrace her soul with an abundance of brio as the sun caresses the ever-flowing oceans; that his heart will pulsate in harmony with the guiding rhythm of hers; that his palms will sweat at the reminiscence of souvenirs long-expired; that his tears will continue to flow quietly, long after the loss of a genuine love…